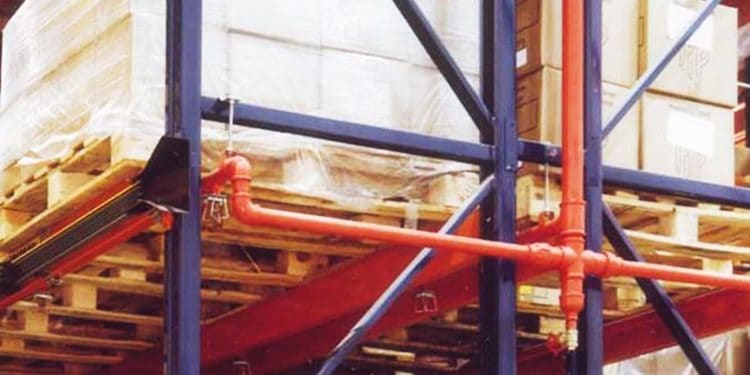 Fire protection in warehouses is a major challenge for all types of buildings that have a high fire load. In addition to goods, some installations contain elements that can fuel the spread of flames, such as plastics, cardboard, wood and others.
To minimise the risk, warehouses must have fire protection, detection and extinguishing systems.

A warehouse is a key element in a company’s supply chain. An interruption of services or the complete or partial destruction of a warehouse can lead to an enormous loss of material, which damages not only the image of a company.
For this reason, it is essential to be vigilant and keep the warehouse in top shape to eliminate the risk to personnel, minimize damage to goods and avoid delays in customer service. In order to minimise the impact, large warehouses are divided by sectors.

Different zones are separated by walls and fire doors to prevent the spread of flames. Prevent, control and stop fires in buildings. In case of increased fire loads, a warehouse has technical problems that require detailed expert studies.

The process calculates the time it takes a metal structure to deal with a fire before it collapses. Time is influenced by many factors such as.

Intumescent paints turn into a dense foam when exposed to fire, which acts as an insulator and prevents the temperature of the protective layer from rising. Since colours do not provide refractory elements, they are used for this purpose. If the paint is less than 100 u thick, the fire from it will calcify and cause a fire. However, it will not spread very widely.
Rack components are rated as non-combustible when steel is used to fabricate them. However, they do not provide the coated element with a fire bearing capacity, intumescent paints should be used for that purpose.

When designing active fire-fighting systems, certain regulations can serve as a basic example. Some standards and rules seem to take a similar approach, but they are unique in other respects. Local regulations meet all these requirements.

Get to know each one of them and address them accordingly. It is important to make full use of the synergies between primary active fire protection system for warehouses.

Automatic fire alarm detection systems are recommended to contain small outbreaks of fire when a fire spreads without the help of other intervening equipment. Most regulatory requirements require these systems to be in place in all warehouses.
However, depending on how passive fire-fighting measures are applied, it is possible to go beyond systems approved by a national regulation.

Locating the fire before take-off is crucial to minimise fire damage both inside and outside the building.

A device that detects fire via certain indicators such as smoke, flames and rising temperatures.
Detector is used for susceptibility to visible flames during the initial phase of a fire (combustion of flammable liquids).
Smoke detectors (optical extraction) are used in warehouses 12 m and higher, where they are installed in the ceiling, where combustible gases can accumulate and spread, requiring fire control.
Thermal detectors are useful in 6m or higher.

Intake smoke detectors, in turn, contain a central sensor that responds to a network of pipes and calibrated openings distributed throughout the warehouse – one aperture corresponds to a sensor.
The system collects air samples from each room and calibrates each opening for sample analysis.
Fire sensors are devices that detect fires and sound the alarm. When fires start, an optical smoke detector detects changes in air impermeability and the presence of smoke. It sounds the alarm from a central control centre and is under constant surveillance.

The sprinkler nozzles are coated with heat-sensitive materials to keep them closed when not in use. Automatic sprinkler systems are used in warehouses.
They consist of a network of pressurized water pipes equipped with drain nozzles and distributed throughout the warehouse, for example around the shelves.

The sprinklers within the affected zone or sectors of the warehouse are activated when the fire is burning and especially when the temperature exceeds 68 to 74 degrees Celsius, which allows water to be sprayed.
The sprinklers switch on the water spray repellent plate, creating a fine water droplet spray pattern that penetrates into the affected area.

For automated warehouses, if sprinkler systems are installed in the ceiling of a shelf, than in the block. It is necessary to place the sprinklers in a flat space away from the load and serve as a funnel for the ascent of the hot gas.
For this reason, the energy of the gas evaporates into water droplets before they reach the fire. To remedy this situation, place a mezzanine level in the rack. Sprinklers can be installed in ceilings of 1.35 m or higher, but are not recommended if they exceed this height.

It is necessary to control the fire in its initial phase so that it does not spread to other areas of the warehouse and affects only a few units of the cargo. In the initial phase of the fire the fire spreads slowly.
Smoke and toxic gases from a fire reach the ceiling of the building where they accumulate, thicken and fill the room until they reach people, making evacuation more difficult.
The control of the smoke extraction system is of crucial importance for automatic fire fighting.
Smoke extraction is carried out through open ventilators in structural joints to dispel the vapours and hot, toxic gases from a fire, together with the intervention of automatic sprinklers, to keep the temperature of vapours at a level that  mininises damage the building.
Increased temperatures and hot fumes that accumulate in the upper parts of a building can undermine the strength of the building envelope and, if the building itself collapses.

Warehouses have the unique characteristic of being stored under the best ecological and constructional conditions, which entails the inclusion of tailor-made fire-fighting and safety systems. If you need to up to speed with your obilgations to fore protection measures at your facility, contact Complete Fire and Pumps your warehouse fire protection specialists