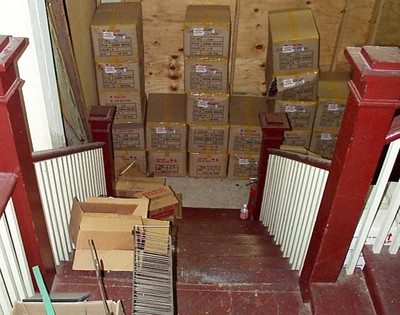 These pitfalls are fairly common, but they can interfere with your fire protection system’s ability to do what it was designed to do – protect your building and its occupants during a fire.

Do any of these sound familiar?

This is one area that can become an issue if it’s not inspected or maintained properly.

When dust accumulates on an electric fan motor like this, a spark or heat from the motor could easily ignite it. Many businesses have big air handling units that are required to have smoke detectors in the duct system that detect smoke from the fans, filters and motors, if filters aren’t changed properly, dust and dirt can contaminate these devices pretty quickly.
They’re usually up high, concealed and hard to get to, and sometimes persons responsible for cleaning and inspecting, might not be able to do due diligence. If someone says ‘’I’ve tested everything else but I couldn’t get to your duct detectors,’’ find somebody else.

Manual alarm pull stations are common in hospitality venues and are frequently blocked by planters or racks of brochures. Sometimes people will block them without realizing they’re doing it. They’ll put a banner or a flyer right over top of the lever to tell people there’s an event. (Pictured: This strobe is hidden behind a plant where it can’t be seen easily during an emergency.)

3) Air diffusers that are too close to smoke detectors.

This commonly crops up after an HVAC renovation changes the diffusers’ original location.

If they’re too close to smoke detectors, they’ll blow dust and dirt right onto the detector and contaminate it, which can result in false alarms.

4) Only part of the fire protection system is inspected.

Find out exactly what your contractor is and isn’t testing, because the regular protocol may only include part of your fire protection system. Many owners own a sprinkler system from one vendor and a detection and alarm system from another, and not clarifying who is responsible for testing what may lead to a partially untested system or a disagreement between vendors over who is supposed to test which components.

When you get your contract proposal from the inspection company, ask if there’s anything in the system they won’t be testing. You should know that up front.

Older control units often have a battery backup. Even if you also have generators for redundancy, if batteries are an option, you need to replace them.

(Pictured: Never use the fire stairs for storage. During an emergency, these boxes will slow or stop people from trying to evacuate)

Keeping the exits clear and open is a fundamental thing.
In restaurants, it seems like a lot of times there will be a table and chairs right in front of the secondary exit door or you’ll go into a big box store and they’ll be restocking and have the forklift parked in front of one of the many exit doors along the perimeter wall.

Even in an office building, there are instances of contractors/couriers etc pulling up in front of buildings and blocking or inhibiting fire escape exits or using them as quick storage. They may only be there for 30 to 45 minutes, but fire codes and regulations are very strict about not blocking or using exit stair enclosures for storage of anything.

This exit stair is almost impossible to navigate around. Imagine a crowd of frightened occupants trying to evacuate through this stairway during an emergency. The stored items are combustible and the remaining pathway is smaller than what is required.

Some building tenants will even lock fire exits as a theft deterrent, which could backfire badly if there’s an emergency and people need to evacuate.

Owners tend to assume that if the generator or pump starts and runs successfully for a few minutes, it’s good to go.

AS 1851  (service and maintenance of fire protection equipement) wants the engine to start, run and make sure it’s running long enough to come up to operating temperature, but on an annual basis we also want to make sure everything is working, so there is a requirement to discharge water at the rate of capacity of the fire pump. It’s making sure it’s still performing the way it was intended. If the flow isn’t what it should be, that could be evidence of a closed or partially closed valve upstream. With the generator, you want to make sure it’s providing the appropriate power output to the emergency systems.”

Fire doors are designed to create a barrier between various parts of a building, so if part of it catches on fire, the door closes automatically and protects the rest of the space. The trouble with fire doors is that they’re inconvenient because every time you go through it, it closes behind you, so people prop them open.” (Pictured: This hotel has a fire door propped open. If there’s a fire, it will spread faster and more easily through open doorways)

A lot of buildings have exit signs that perform the function of both lighting the sign and downlighting the exit path and those burn out fairly regularly. They often get overlooked because people say they’ll get around to it eventually.

More on the importance of emergency and exit lighting.

Daisy-chained power strips are extremely common and can lead to fires by overheating electrical outlets. (Overloaded plugs are a fire waiting to happen. This setup daisy-chains multiple power strips increases the risk of overheated wiring that can lead to a fire.

Need help with compliance for your business? Contact Complete Fire and Pumps and talk to one of our expert team..

ICC : The International Code Council develops the International Fire Code. Order a copy of the code itself or make it easier to manage your fire protection system with the Fire Inspector’s Guide or Fire Code Essentials.

Recession, Fire Protection and You

Automatic Fire Sprinklers and You